A brief history of Toowoomba Basketball

Basketball in Toowoomba began in as separate men’s and women’s Associations and competitions in 1948. Marie Smith, June Rose and Mavis Nelson were the nucleus of the Toowoomba Women’s Basketball Association and the Bob, Danny, Joe Smith, Ron Tape (Senior), Tom Baker, Keith Nelson and Bob Dorricot were the nucleus of the Toowoomba Men’s Basketball Association. The Drill Hall, Newtown Hall, the Indoor Bowls Hall and Groom Park outdoor courts were the venues used. Rex Hubbard the Commanding Officer of 7SD was the prime mover in getting the Toowoomba City Council to build the Groom Park Courts.

During this period Morman missionaries Nelder and Swann had a good impact on the game in Toowoomba. Representative basketball was played via the BQ Zone structure. Ron and Denise Blades, Neville Bousen, Peter Siddans and Frank Kelly were the mainstay of the administrators for zone trials which encompassed the South Queensland region. Teams to play in Queensland Championships were chosen from players in Toowoomba, Warwick, Stanthorpe, Gatton, Pittsworth, Clifton, Dalby, Goondiwindi, Kingaroy, Roma and Charleville. For a small period of time Ipswich and Southport were also in the SQ Zone.

In 1967 the Mountaineers were established by Barry Raftery, Barry Neilsen and Neville Bousen and this team competed in an Eastern Conference competition. When the Conference folded the Mountaineers would play periodically against touring teams including Paratels and visiting American teams. In 1971 a highlight was the Mountaineers coached by Raftery and Neilsen defeating the Queensland State Team 72 – 56. In 1970 the Toowoomba Men’s and Women’s Basketball Associations merged and Toowoomba Basketball Association was born under the leadership of Barry Raftery, Marie Smith, Ian Scannel and Ron Blades. Tragically the death of Marie Smith in 1971 left a huge void in the basketball administration as did Gwen Tonge’s death in 1974.

In 1976 the Water Street stadium was officially opened as a new home for TBA. Pigotts, Railways, Eagles, Saints, Centrals, USQ and Wests Clubs developed strong teams in this era in both junior and senior divisions. In 1980 BQ changed from the Zone competitions structure under the leadership of Ian Watson the State Director of Coaching to a Club Championship Model. 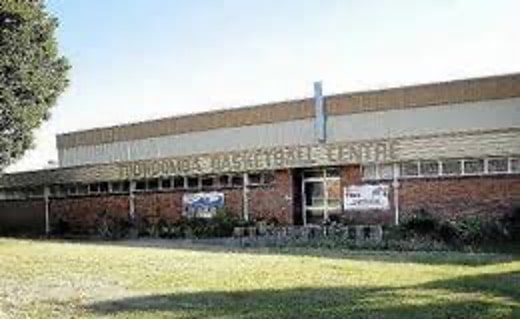 Saints Basketball Club represented Toowoomba in Queensland Club Championships and indeed the Women Saints team played in the Australian Championships in Adelaide. During this time BQ established a link with NCAA and Jack Thurmblad and bought graduating College players to Queensland to play in a State-wide AAABL competition in which the Mountaineer men played with import players. This was truly the first time the Mountaineers could play a genuine home and away competition.

The 1980’s featured the growth of basketball with Toowoomba representative teams playing in BQ State competitions as Toowoomba Basketball Association teams with the Mountaineers reaching their peak performances in 1990 and 1991 with State League Champions in the Men with Coach Harry Spencer and finalists in the Women with Coach Trevor Dallas. Several Junior teams also won State championships in this era. It was also during this period that referee development was at its best with Ron Blades and Trevor Dallas featuring in NBL games regularly and in more recent times Anthony Leicht and Stuart Bailey reached high standard.  Although country Associations could play as Association teams at State level, many country players now joined with Toowoomba teams to participate in State Championships. The 1980’s also saw the development of Toowoomba Secondary and Primary Schools Friday night Basketball Championships which have been a feature of junior basketball in Toowoomba.

The TBA assists school teachers run these competitions and they prove to be an excellent recruiting ground for TBA players. In the mid 1990’s Pop Dickerson showed great personal initiative in launching Supercamp in Toowoomba which he is still running today attracting players and coaches from all around Australia. Under the leadership of Barry Raftery and John Gouldson the TBA was a foundation member of the Toowoomba Sports Club in 1992 and the TSC had a spectacular beginning during which time the TSC repaid many times the capital outlay back to TBA. Building a new venue with large debt at a time when legislation changes proved to be a problem for the TSC unfortunately resulted in Receivers being appointed in 1998 but the Board and Management worked tirelessly to bring the Club out of Receivership. Now flourishing, the TSC is a major supporter of Basketball in Toowoomba.

In 2002 Michael and Kathy Neilsen set up the Mountaineer Hall of Fame to recognise the major contributors to the Mountaineer Program at various times. Clive Berghofer and John Armstrong (deceased) have been outstanding sponsors of the Mountaineers and deserve a special mention together with Trevor Grieve, Torben Marcussen, Darren Mentor, Harry Spencer and John Gouldson who have been pivotal in maintaining the momentum for the team over the years. Toowoomba is proud of their Olympians Donna Quinn, John Dorge, John Rillie and Jenni Screen that have come out of their programs.

Several attempts were made to expand the Water Street facility over the years without success but in 2012 a deal was struck to sell the court and transfer the lease to the City Golf Club and basketball is now based at St Mary’s Old Boys Association Clive Berghofer Arena and the Mountaineers are based at USQ Clive Berghofer Recreation Centre. This ends a 36 year history of basketball at Water Street. The Mountaineers used this venue over the years but have played recent QBL games at USQ Clive Berghofer Centre which is an international standard facility.  Courtesy of BER we now have indoor court facilities in most schools but TBA still does not have a 4 court facility and that is a goal now in place with TBA. The City Golf Club payments from the sale of the Water Street facility should help finance a new facility in the near future. Anthony Corcoran and his D League men’s team have been the standout performers for the Mountaineers for the last two years going down narrowly in the final in both 2011 and 2012 to Runaway Bay.

Anthony Corcoran and Pop Dickerson revitalised the Mountaineers in 2013 to make the playoffs for the first time in a decade. The latest venture initiated by Darren Mentor, John Gouldson and Melissa McLean has been the commencement of the Festival of Basketball – Promoting Positive Choices where NBL sides participate in a Pre-season competition, training and school clinics.  2011 TBA hosted Melbourne Tigers and Gold Coast Blaze and in 2012 they hosted McDonalds Townsville Crocodiles and Sydney Kings. The tragic death of Stephanie Mylonas and Stacey Richter in a car accident whilst driving home from the last 2012 QBL game in Bundaberg has led to the Clive Berghofer Toowoomba Mountaineers accepting the “USQ Positive Choices through Basketball” theme for their entire program. These players’ lives will be immortalised forever through this Festival.

Another new initiative instigated by Darren Mentor and Harry Spencer is Midnight Basketball which commenced in 2013. This program seeks to support the disadvantaged youth of Toowoomba.

Unfortunately, TBA has in the past been subject to division with separate Associations being formed. This has hindered the development of basketball by dividing the basketball community with duplicated efforts.

The 2014 Mountaineers have made every effort to link together the Junior and Senior Mountaineers and the USQ Positive Choices through Basketball concept. The school clinics conducted by the Mountaineers will attempt to have Import Players visit every school in the region and invite participants and their families to attend the Home Games at CBRC.